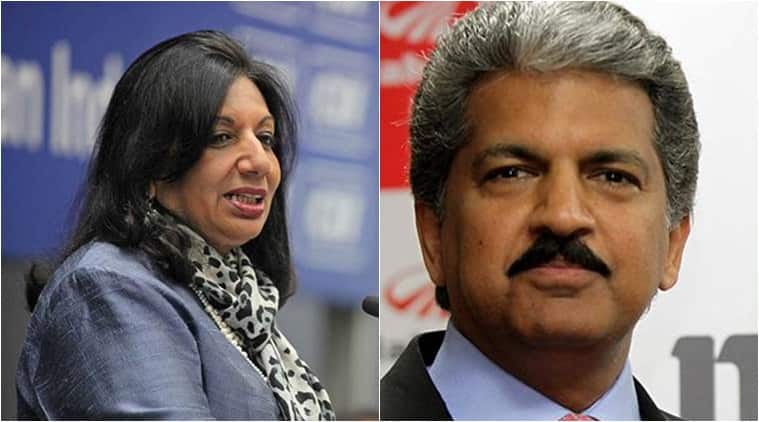 Some of the biggest names of India Inc. such as Kiran Mazumdar Shaw and Anand Mahindra have expressed shock over Cafe Coffee Day owner VG Siddhartha’s death. Many prominent business personalities who are no stranger to financial turbulence have also pointed out to the growing incidents of tax-terrorism following Siddhartha’s letter.

The body of VG Siddhartha was found on the banks of the Netravati river near Mangaluru at 4.30 am Wednesday. Siddhartha, the son-in-law of former Karnataka chief minister SM Krishna, was first reported missing on Monday evening by his driver, who was the last to see him. He had instructed his driver to drop him off at a bridge over the river en route Sakleshpur near Hassan.

Reacting to the demise of Siddhartha, Biocon MD Kiran Mazumdar Shaw said it was a “shocking and sad end to a quiet n unassuming pioneer who started the coffee cafes business ahead of Starbucks in India”.

Posting the letter, Shaw further tweeted that the Private Equity fund manager acted like a moneylender which seemed to have caused unbearable stress to VG Siddhartha and it needs to be investigated. 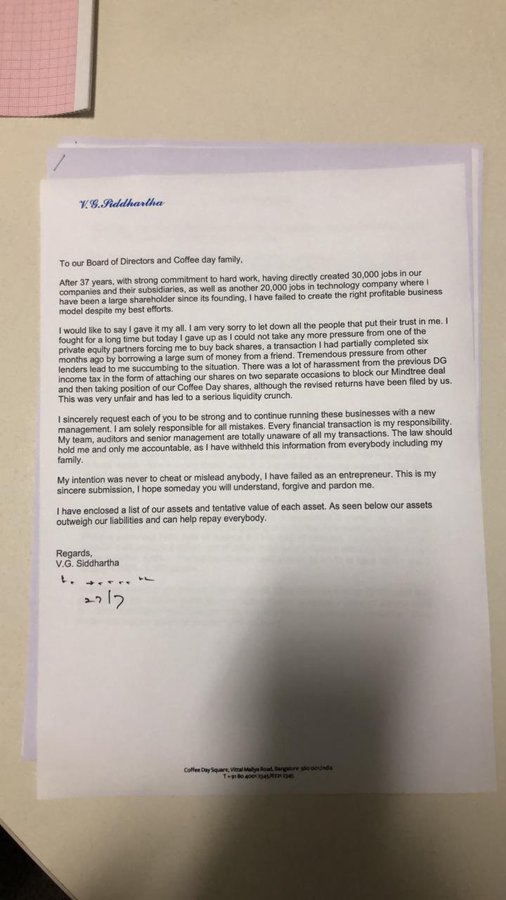 Hours before his disappearance, Siddhartha had called his personal staff at the CCD head office in Bengaluru and informed them about a letter to be disseminated. The purported letter referred to the “tremendous pressure” he was under from lenders and “harassment” from Income Tax officials. And that he was “very sorry to let down all the people that put their trust in me”.

Mahindra Group chairman Anand Mahindra though did not know VG Siddhartha personally, later tweeted that entrepreneurs must not allow business failure to destroy their self-esteem as it will be the end of entrepreneurship.

Snapdeal co-founder and CEO Kunal Bahl had met the CCD founder on a few occasions and called VG Siddharth an absolute gentleman. “How can someone get pushed so far to the edge in business, that they decide to take a fall themselves. I will always see his legacy as a very successful entrepreneur who brought coffee in our lives.” he tweeted.

Soon after the letter was circulated, reactions started pouring in from India Inc who called the CCD founder’s death as unfortunate and heartbreaking. The co-founder of SlideShare, Amit Ranjan, said that it is a black-letter day for startups and entrepreneurship in India. Drawing parallels with the CCD founder’s case, Ranjan said that new-age startups are lucky to be funded by equity while the debt-driven businesses are far more harsh and stressful.

Fugitive liquor baron Vijay Mallya Tuesday targeted government agencies and banks, saying that they can “drive anyone to despair”. Taking to Twitter, Mallya pointed out to the similarities with the case of CCD founder VG Siddhartha.

Mallya, who is currently in the UK, has been charged by the Enforcement Directorate (ED) of defaulting on bank loans to the tune of Rs 9,000 crore. He is also facing an extradition trial in the UK.

Referring to the letter written by VG Siddhartha, Mallya said that he was indirectly related to VG Siddhartha. Calling him an excellent human and brilliant entrepreneur, Mallya added that he was devastated with the contents of his letter. He further alleged that even he was being harassed despite an offer of full repayment.

I am indirectly related to VG Siddhartha. Excellent human and brilliant entrepreneur. I am devastated with the contents of his letter. The Govt Agencies and Banks can drive anyone to despair. See what they are doing to me despite offer of full repayment. Vicious and unrelenting.

Following up with another tweet, Mallya said that in western countries, government and banks help borrowers repay their debts. “In my case, they are obstructing every possible effort for me to repay my debt whilst competing for my assets. As far as the prima facie criminal case goes wait for the appeal granted.” he posted.